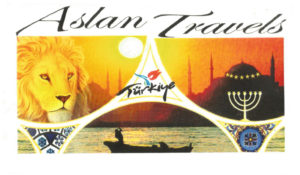 Aslan Travels is my post about living in Turkey today. It is about traveling and being with Aslan.

This picture above is my card. On this page I will explain its symbolism.

On the upper left there is a painting of a lion.

The sky line silhouette both the Blue Mosque and to the right the Hagia Sophia.

The Menorah is the candle stick on the far right of the card.

There are 7 stars above the Menorah.

The fishing boat drifts in the dawn under the bridge or circle of time.

This lion is also on the cover of the book, “Chronicles of Narnia” by C.S.Lewis and  illustrated  by my beloved friend Debbie Maze.  Aslan means Lion in Turkish.  C. S. Lewis wrote about the Kingdom of God and used the lion named Aslan to represent Christ. Aslan travels to me means that the Lord is on the move and where the Spirit of the Lord is,  there is liberty!

The Blue Mosque is a large Muslim place of worship. It was built in the early 1600’s almost 200 years into the Ottoman Empire whose headquarters were in Constantinople, or present day Istanbul.

The Hagia Sophia’s full name in Greek is Ναός τῆς Ἁγίας τοῦ Θεοῦ Σοφίας, “The place of the Holy Wisdom of God.”  It was construction in 537 and was a Church all away up until 1453 when it became a mosque with the fall of the Byzantine Empire. Now it is a museum.

It is a spectacular experience to visit the Hagia Sophia and I will share more in proceeding posts so you will all want to come and soak in its majesty. If you can’t make it here physically  maybe I can fulfil a dream or two by taking you on a written journey. ( with pictures )

The seven stars are in place of the present day windows in the Hagia Sophia.

There is more about the stars at the end of this post.

The dawn is of the new day of the prophetic.

The fisherman is the call to be fishers of men.

And why a Menorah on the card? 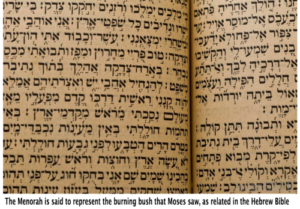 The Menorah is said to represent the burning bush that Moses saw, as related in the Hebrew Bible (or Tanakh). Historically, one was used for ritualistic purposes in Jerusalem during the time of the Temple. It burned olive oil.  The Temple Menorah remains on record until sometime during the sixth century, after it was brought to Constantinople. They say all roads lead to Rome but history seems to return so often to Constantinople which is present day Istanbul, Turkey.

Menorahs today typically have seven or nine branches. During the time of the First and Second Temples, candelabra had seven branches. After the Temples were destroyed, which is said to have been around 586 BCE and 70 CE, respectively, a custom developed to preserve the sanctity of the Temples — not to reproduce things from the Temples.  In more modern times, some Jews have returned to using a seven branch menorah.

In terms of symbolism, it is the menorah, not the sign of David, that is the symbol of Judaism.

My Father’s name is Professor Harold Joseph Berman. He is a Messianic Jew. I was always assumed to be Jewish by my Maiden name.  It is my heritage. The Professor’s testimony can be found here:

Interestingly enough, the Menorah is also part of Revelations 1:9-20, the final book of the Bible.

This is the recording;

9 I John, who also am your brother, and companion in tribulation, and in the kingdom and patience of Jesus Christ, was in the isle that is called Patmos, for the word of God, and for the testimony of Jesus Christ.

10 I was in the Spirit on the Lord’s day, and heard behind me a great voice, as of a trumpet,

11 Saying, I am Alpha and Omega, the first and the last: and, What thou seest, write in a book, and send it unto the seven churches which are in Asia; unto Ephesus, and unto Smyrna, and unto Pergamos, and unto Thyatira, and unto Sardis, and unto Philadelphia, and unto Laodicea.

12 And I turned to see the voice that spake with me. And being turned, I saw seven golden candlesticks;

13 And in the midst of the seven candlesticks one like unto the Son of man, clothed with a garment down to the foot, and girt about the paps with a golden girdle.

14 His head and his hairs were white like wool, as white as snow; and his eyes were as a flame of fire;

15 And his feet like unto fine brass, as if they burned in a furnace; and his voice as the sound of many waters.

16 And he had in his right hand seven stars: and out of his mouth went a sharp twoedged sword: and his countenance was as the sun shineth in his strength.

17 And when I saw him, I fell at his feet as dead. And he laid his right hand upon me, saying unto me, Fear not; I am the first and the last:

18 I am he that liveth, and was dead; and, behold, I am alive for evermore, Amen; and have the keys of hell and of death.

Now  today the seven churches are in Turkey where I live. My husband and I live in Smyrna which is present day Izmir. It is one of the stars above the candles. Thus I wear a golden Menorah.  It symbolises where I have found my home.

I have given my card to thousands of people traveling throughout Turkey and throughout the world who I have met on one road or another… on land, sea and/or through the air.  I offer my card to you. Please keep in touch.

Oh! I almost forgot. Türkiye is the name of this country in the Turkish language and the tulip is one of its many symbols. But that’s another story.